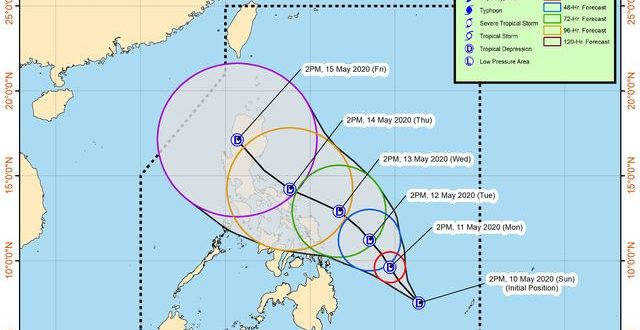 The first storm of 2020 will likely hit areas in Mindanao, the weather agency PAGASA said on Sunday.

At 2 p.m., a low pressure area located east of Mindanao developed into a tropical depression, named “Ambo” by state meteorologists.

In its latest update, PAGASA said Ambo was forecast to bring scattered light to moderate precipitation with occasional heavy rains over the regions of Caraga, Davao, SOCCSKSARGEN, and Maguindanao, but said it was unlikely that storm signals would be raised in the next 48 hours.

In an interview with CNN Philippines on Sunday, PAGASA Weather Forecaster Samuel Duran said Ambo’s presence did not mean the onset of the rainy season.

[Translation: Right now, although we already have a storm, we still don’t expect it to sustain continuous rains because there need to be larger weather systems affecting it.]

Duran said Tropical Depression Ambo is forecast to come close to the Bicol and Aurora areas later in the week, but is expected to not directly affect Metro Manila.

As of 4 p.m. the center of the storm was located 545 kilometers east of Hinatuan, Surigao del Sur, and was moving northwest at 15 kilometers per hour (kph).

Ambo has maximum sustained winds of 45 kph and gustiness of up to 55 kph. |via cnnphilippines.com