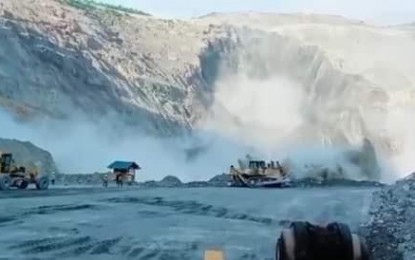 Four miners were confirmed dead while six others have remained missing following a landslide at the mining site of the Carmen Copper Corp. (CCC) in Toledo City in midwestern Cebu Monday afternoon.

Local authorities here have searched the area since early Tuesday to rescue the still missing miners.

The Mines and Geosciences Bureau in Central Visayas (MGB-7) has sent a team to Toledo City to assess the current situation.

“The mine pit operation is temporarily suspended to determine the cause of the landslide,” he said.

Moncano cited initial findings which indicate that Typhoon Vicky may have “exacerbated the already waterlogged limestone and mudstone layer from the prior typhoons that weakened its contact with the intrusive rock base.”

He said a fault line called the Barot fault was also observed in the slide area and may have contributed to the landslide.

Meanwhile, the Chamber of Mines of the Philippines said the incident is quite unfortunate.

“Atlas is known for its strict adherence to the highest safety and health standards. Nevertheless, accidents happen in any industry. This is why the Chamber and its members are constantly looking for ways to further improve our safety and health protocols,” it said in a statement.

“The important thing is for the industry to learn lessons from incidents such as this to continue to improve its protocols and practices. Undoubtedly the industry as a whole will absorb the lessons from this incident,” the chamber added.

The landslide occurred at around 4:15 p.m. at the Carmen Pit, CCC’s mine operations site.

Toledo-based CCC is an operating mine of publicly-listed Atlas Consolidated Mining and Development Corp. (ACMDC).

In a statement disclosed to the stock exchange Tuesday, ACMDC said “the incident was traceable to the incessant rains for the past several months and aggravated by Typhoon Vicky which hit parts of the Visayas, including Toledo City last Friday, December 18, 2020.”

“The Management of CCC is doing all the necessary action to assess and address the overall situation. We will continue to inform the concerned agencies as well the general public of further developments,” the mining firm said. (PNA)